Mistakes Matter, So Make More of Them

I’ve been doing a series of coaching calls with a wide range of successful people, to learn what’s holding them back in life. One of the most common fears: the fear of making mistakes. And it’s no wonder…

It’s election time. And political discussions tell us that anyone who makes a mistake should be shunned for life, barred from public office, and labeled a “flip-flopper” (especially if they change their mind as a result of learning from their mistake). Success literature, however, tells us that we should learn to be comfortable with failure and make mistakes! One of my most accomplished business school professors once said: if you’re not making enough mistakes, you’re not taking enough risks. How about you? Do you know how to make the most of your mistakes?

Our school system trains us for decades that not getting the right answer means we were wrongand somehow didn’t work hard enough. Once we get into the real world, we bring that mindset along with us. If we don’t get the results we want, we assume we made a mistake.

This isn’t necessarily so. Here’s a thought experiment to understand why. Imagine you have two quarters. One is perfectly fair. It has 50%/50% odds of flipping heads or tails. The other is weighted. It has a 60% chance of flipping heads.

We have two Coin Operators, whose job is to flip heads. They’re allowed to choose either coin to flip.

Who made the mistake? If we look at the outcomes, it appears that Harley made the mistake. But before we know the outcome, we would favor Haley’s decision to choose the coin that is weighted towards heads. Haley pursued the outcome using the right process, even though it was the wrong outcome.

I hear you cry, “But Harley made the right choice! The outcome should have been heads!” I agree! We really want to believe that our actions will give us the results we want. The real world, however, is sadistic: sometimes things work, and sometimes they don’t. We have a name for this. We call this luck.[1]

But if you want to train yourself to get what you want in life, don’t measure mistakes by outcomes. Burn these definitions into your brain:

Other People May Not Suck as Much as We Think

Deep down inside, we all love judging other people, especially politicians. But this new definition of mistakes means we need to be careful. If we judge them based on outcomes, we might end up deciding that the Peytons of the world are amazing and awesome and worthy of backrubs, while the Harleys of the world should eat rocks.

Unfortunately, however, unless we’re paying attention during the entire effort, we rarely know what process someone used to reach their outcome. That makes it harder to judge them accurately.

I took a mediation class, where I had the joy of mediating a 10-party negotiation between the heads of several organizations. Each organization cared about different things, with different priorities. The real estate developers wanted more land. The conservationists wanted land made off-limits to developers. The Mayor cared about economic development and tourist trade. The historical society cared about limiting changes to any part of the city.

The final agreement satisfied no one, but at least everyone was equally dissatisfied. To each organization, the outcome surely looked like a failure. But the representatives reached the best agreement they could, given the conflicting interests, the time available, and the fledgling abilities of the mediator.

It’s easy to say “my [politician, boss, representative] failed by not getting outcome I wanted.” If we really want competent leaders, however, we do better to judge the process they use. Do they take steps to understand the issues? Do they understand whose support is needed and build the necessary coalitions? Do they compromise where needed, and hold firm where needed?

When evaluating others, don’t judge their success and failure from their outcomes. Look as closely as possible at their process.

Getting the Most Out of Your Mistakes

Although mistakes are a sign that you’re really moving, stretching, and growing yourself, that doesn’t mean you want to make the same ones over and over. You want to learn as much as you possibly can each time things don’t work out.

When a mistake happens, hold an After Action Review. Take time to reflect explicitly on what worked, what didn’t, and why. Consider what happened on the ground—what worked out the way you expected, and what didn’t. What happened that you didn’t plan for, and what didn’t happen that you did plan for? Also consider what happened in your head. How did your a priori beliefs factor into what happened? Were your interpretations of what was going on correct? Where did you waste time paying too much attention to trivialities, and where did you miss opportunity by not paying enough attention?

Making mistakes, combined with a good after action review, helps you refine several important aspects of your future thinking.

We all have theories about what causes what. Some of our theories are pretty good. We believe that watering a plant will help it grow. We water the plant. It grows. Our cause/effect works, we’re happy, and the plant is happy (maybe even ecstatic, depending on how long it’s been since you last watered it).

Some of our theories really don’t work at all. “Step on a crack, break your mother’s back” isn’t orthopedically sound advice. If you want to protect mom’s back, teaching her proper posture and good form when lifting heavy boxes is a far better plan.

And some of our theories about cause and effect are sort of true. “Work hard and you’ll get ahead” certainly works great while we’re in school. But once we’re in the work world, the link between hard work and advancement is much more tenuous. In many cases, it doesn’t hold at all.

Avoidable mistakes often help us refine our notions of cause and effect. Many people believed that putting money into the stock market would result in a consistent, positive return on their money. In 2008, an entire generation discovered that cause/effect in stock investing is more subtle, and less dependable, than they thought. Next time a financial advisor happily informs them “invest in fund X and you’ll make 11% interest for 43 years,” they’ll (hopefully) know to refine their notion that giving money to a financial advisor automatically leads to a comfortable retirement.

We don’t just learn rules about cause and effect. We also learn how to discriminate between different situations. For example, with the label side down, a tube of toothpaste and a tube of athlete’s foot creme might look identical. One might simply look in the drawer, see a tube, squeeze it onto a toothbrush, and pop that brush right into their mouth and start brushing.

One might then discover one’s mistake. This will lead quickly to the learning that although tubes look the same face down, there are subtle clues as to which tube belongs in the mouth, and which tube belongs in the foot. For example, fine print on the back of the tube that says “for treatment of athlete’s foot and other topical fungal infections. Don’t eat it, you moron.”

That particular mistake is the one that got me to start paying close attention to the difference between tubes of cream.

Then there are my singing lessons, where my voice teacher forced me to listen to recordings of our lesson. When I was able to stop gritting my teeth, I began to develop the ability to distinguish between a tritone and a major fifth. It turns out that when you’re singing harmony, that distinction matters.

Mistakes help us refine the distinctions we make in the world.

And finally, mistakes help us understand the role of luck in what we’re trying to do. To return to our coin toss example, if we know Harley chose the 60/40 coin to flip, and it still came up tails, that tells us that luck played a factor in the outcome. While we would have prefered that Harley flip heads, we can be confident that the outcome of tails reflects luck, and not Harley’s abilities.

We might think mistakes are bad, but nothing could be further from the truth. Mistakes help us learn if we respond correctly. We should understand the roles luck and skill played in our outcome. Analyzing our process will tell us if we our good process gave a poor outcome, or whether we had a genuinely poor process. And we should refine our understanding of cause/effect, our discrimination abilities, and the role of luck. Our greatest advancement happens when we learn when things go wrong. To do anything else would be a mistake.

Stever has a rare gift – a truly original mind. I guarantee you’ll come away with at least one truly new, incisive to the bone, quite clever and compelling way of thinking about whatever that speaking topic was.

Mistakes Matter, So Make More of Them 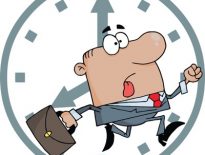 Life balance Social media and the deliberate life: is divorce i…
Business The Right Conversation will Get You What You Want…
1