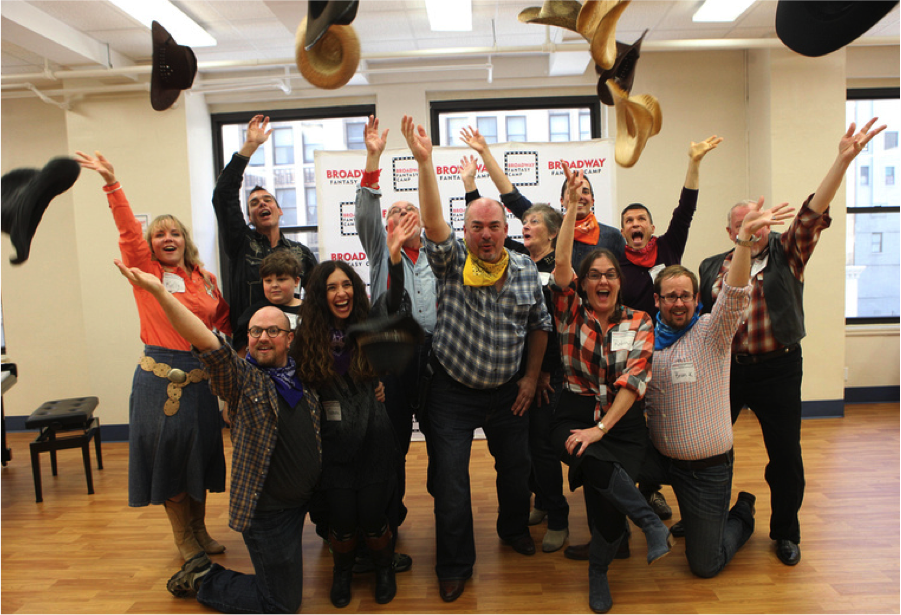 Broadway Fantasy Camp, and I partner to run business workshops that use theater and performing arts exercises to tap your team’s creativity. We use concrete, business-based facilitation to tie the learning directly into your team’s outcomes.

Click the arrows to explore the topics and curricula.

According to most studies, people’s #1 fear is public speaking. Number two is death. This means, to the average person, if you go to a funeral, you’re better off in the casket than in doing the eulogy. — Jerry Seinfeld

Persuasive speaking is one of the most important skills a person can have. Virtually everyone in business needs to present ideas in a way that’s credible, authoritative, and worth taking seriously.

Effective public speaking is one of the most important life skills a person can develop. How someone delivers their message while presenting can be a deciding factor in many things such as career development, business growth and even in the relationships with friends and family.

We have plenty of outliners and presentation software for organizing content. This workshop provides the toolbox for confidence, poise, and presence needed to handle the expected and the unexpected with style.
Participant takeaways include:

Setting strategy, designing products, and problem-solving of any kind all benefit from boosting creativity. Achieving highly creative output from your team requires your team to be in a highly creative state of mind before they begin to generate options and ideas.

Drawing from the creativity of theatrical performance, we first provide exercises and facilitation to open up your team’s thinking, get them out of their normal “business selves,” and help them let go of their inhibitions. Then we transition directly into producing business results on the business problems your team brings to the session.

We customize each engagement to the needs of your situation. We can transition to your facilitators, or we can facilitate, guiding your group through the workshop to begin solving the business challenges of your choice.
Participant takeaways include:

Working in a high-functioning team magnifies the strengths of everyone on the team. But if a team doesn’t “gel,” it can actively keep its members from making progress.

Theatrical production requires the purest forms of teamwork. No individual can make a production a success, but any weak link can tank it. The best Hamlet in the world won’t matter if the lighting designer has the actor delivering their famous soliloquy in darkness.

Our team-building program recreates that experience in your own business. We work with your team to create a mini-production, in which every person plays a key, indispensable role. Then the fun begins. The real world production throws obstacles into the experience that the team must overcome as a team.

We then guide the group to understand how to apply the lessons from their performance to their work together. We demonstrate how to transfer what they’ve learned in the exercise into teamwork that produces business results.

During the course of the workshop we will address:

Team members needing to know and understand each others’ roles.

Innovation requires the ability to think creatively and come up with new ideas. Then, it’s time to take action. People hold back from action out of complacency, fear of failure, or being too wedded to “the one right way.”

Using theater Open Scene exercises, we help your team members approach the same situation in very different ways from the vantage of several different characters. They share their choices with each other, so everyone has the opportunity to view multiple solutions to the same circumstance.

Then the teams bring what they’ve created into discussions about your current business challenges. They apply what they’ve discovered towards a solution to those challenges.

By inhabiting a character they’ve created, people gain the confidence to go beyond their normal comfort zone.

The mindset shifts that will be explored are:

The tools we have today give us unprecedented power in getting work done. But very same tools that give us the power can hold us back if they’re not used well. Learning how to manage our tools and ourselves, however, can help us become far more productive, with far more ease.

This workshop begins with an interactive, 45-minute 2-person musical, performed by New York professional actors, based on the top-10 Get-it-Done Guy iTunes podcast. We then move into a session custom-designed for your organization, in which we adapt the techniques so they can be applied immediately in your organization.

The goal of this presentation is to teach the group techniques that can save at least 30 minutes a day, every day, adding up to 3 work weeks per year for every participant.

We customize the session to include any areas you believe will be especially beneficial for your organization. Topics that are already built in to the presentation include:

Available using: Work Less and Do More: The (Zombie) Musical

How would life change if you committed to living only a life that you defined as extraordinary? This presentation/workshop explores that question.

We hear the rules we have for life success, rules like “work hard,” from the time we’re young. We repeat them to our friends, our children, and ourselves. Yet many of those rules remain unchallenged throughout our lives. Or if we do challenge them, we don’t know what to do instead.

Creating an exceptional life demands a balance between identity—who we are—and capability—what we can do. This workshop, based on Stever’s TEDx Mill River presentation, relates his experience changing the rules and spending three years driving his life towards a perfect “10″, rather than following his “should” or “ought to”s.

During that time, he created one of the world’s top business podcasts with almost 200,000 weekly listeners, wrote a book, helped with the strategy for the world’s #1 entrepreneurship school, co-wrote a one-man musical (with no prior experience), acted, sang, and danced in three musicals, co-founded two companies, and began learning to sight-sing.

Listen to the presentation and view the slides, as given to the Harvard Business School alumni organization.

This presentation takes attendees outside their normal life assumptions to explore what success means and how to achieve it:

The business-specific portion of this presentation will guide participants through creating a “life and work map,” in which they connect their daily activities to the larger goals in their life and work. It will help participants understand where their job is and isn’t in alignment with the rest of their lives, so they can begin to take ownership of their career and professional development. 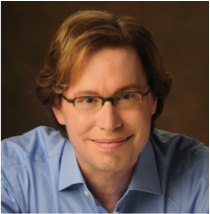 Stever Robbins is an executive coach, serial entrepreneur, and co-designer of the Harvard MBA Foundations Program. His top-10 business podcast the Get-it Done Guy has over 23 million downloads. He was a highly-rated speaker at TEDx MillRiver. Stever is quoted widely in the media, including The Wall Street Journal, Investors Business Daily, Forbes, BusinessInsider, Inc. Magazine, The Washington Post, and The New York Times. He has appeared as an expert commentator on NBC Nightly News, ABC News Now, CNN-fn, and FOX News. He co-created and taught Using Social Capital for Career Advancement at Babson College. He is also the author of Amazon top-10 business book Get-It-Done Guy’s 9 Steps to Work Less and Do More and It Takes a Lot More Than Attitude to Lead a Stellar Organization. He holds degrees from MIT and Harvard Business School. 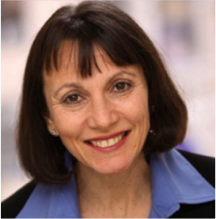 Lauren Class Schneider is the founder and Executive Producer of Broadway Fantasy Camp. She has been producing, directing, and stage-managing theatre, television and live events for almost 30 years. On Broadway, she produced The Velocity of Autumn with Estelle Parsons, High with Kathleen Turner, and Looped, for which Valerie Harper won a Tony Award™ nomination as Best Leading Actress in a Play. For 15 seasons Lauren has produced the Drama Desk Awards and served on numerous Tony, Grammy, Daytime Emmy and Video Music Award telecasts. She works with business leaders in New York and Washington, DC, to help them deliver their messages persuasively, effectively and memorably.

Open Scenes
The Broadway Fantasy Camp facilitator will engage participants in introductory scene work. “Open Scenes” are short scripts with dialogue only. They intentionally lack the specifics to identify time, place, or character. Participants are divided into pairs, and each pair is given an open scene. Based on the prescribed dialogue, each pair creates a set of characters and story that they’re telling with the dialogue. They then design a presentation of the scene using pauses, action, and intonation to convey the story to the other participants.

“Open Scenes” facilitate communication, creativity, teamwork, and presenting. The final presentation communicates the story and characters with the audience. Participants learn to listen for meaning and subtext, while characterizing dynamic relationships. Since each script is used for multiple groups, everyone is given the opportunity to expand their thinking by experiencing many different interpretations of the very same dialogue they used and interpreted one way.

Open scenes are designed to expand how participants respond to and interpret the same situation, exposing them to multiple interpretations. This skill is one basis for tapping into diverse viewpoints and bringing them to bear on business problems. 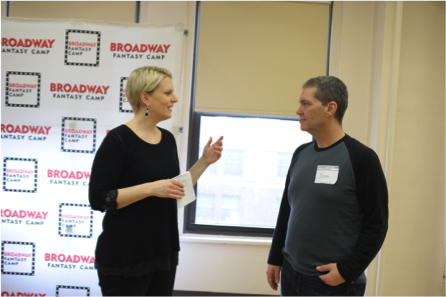 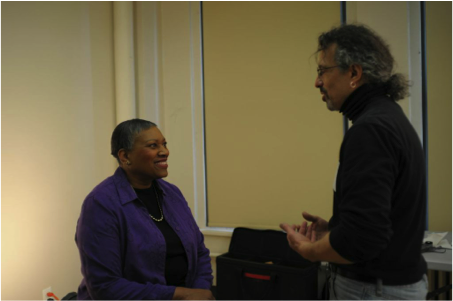 Sing Broadway, Dance Broadway
With the leadership of a Broadway music director, your participants learn a well-known song from a Broadway musical. Examples include: “All That Jazz” (“Chicago”), “Take a Chance on Me” (“Mamma Mia!”), “Any Way You Want It” (“Rock Of Ages”), “Walk Like a Man” (“Jersey Boys”), and “Oh What a Beautiful Mornin”(“Oklahoma!”).

Add to the session Broadway “tricks of the trade” and participants, (who don’t need to sing well) will be treated like pros. They will be encouraged, challenged, and taught that each voice adds to the greater good. We will choose specific vocal exercises to magnify the business topic we address in the follow-up session. By the time they’ve learned the song, participants will feel more confident, energized and part of a cohesive group, while having created a real, tangible performance.

Next, it’s time for participants to “get on their feet.” The BFC choreographer will stage the number with the group. This will involve dance steps (not more complex than the Electric Slide or Macarena) but from the dance vocabulary of Broadway musicals. Choreography is taught in relation to the lyrics, making learning easy, and reinforcing success in the process. We add props and costumes and participants are transformed into performers. Stage fright becomes channeled into excitement, and thanks to the rehearsal process, confidence is high.

You have to rehearse. It makes you better. 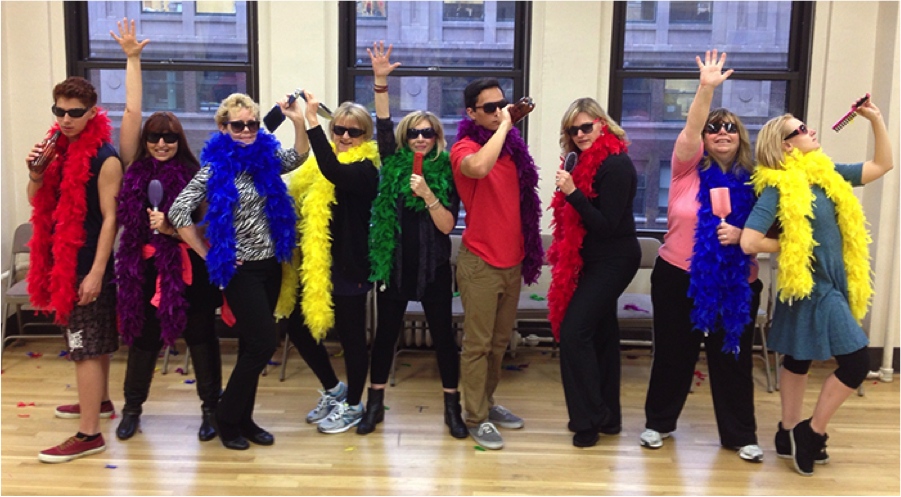 Work Less and Do More: The (Zombie) Musical

Work Less and Do More: The (Zombie) Musical is a 2-person, 45-minute musical about personal productivity. It follows the journey of self-proclaimed General Stever Robbins as he gives his newest zombie army recruits—the audience—their orientation lecture in preparation for their initial battle to dominate the world and secure the world’s supply of Oreo ice cream cake for themselves.

Over the course of the show, General Robbins teaches several tips for helping get things done efficiently:

The show is interactive, with audience interaction and participation helping to make the tips even more memorable. Following the performance, the audience can engage with a Q&A or fully customized workshop to help adapt the principles shared in the show to their unique circumstances.

Audience members have written letters several months after seeing the show, saying they are still using the tips, leaving them with major leaps in their productivity.

The theatrical portion of the workshop was composed by off-Broadway composer Joel Derfner and Stever Robbins. The business application is facilitated by Stever Robbins.

You can see a sample video from the show at http://WorkLessAndDoMore.com. 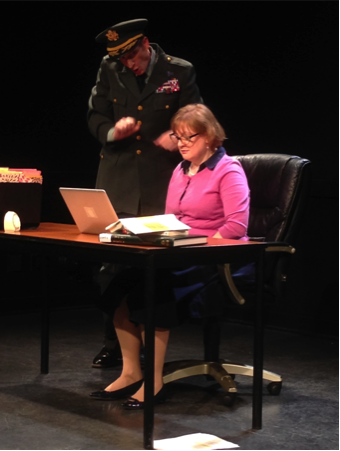 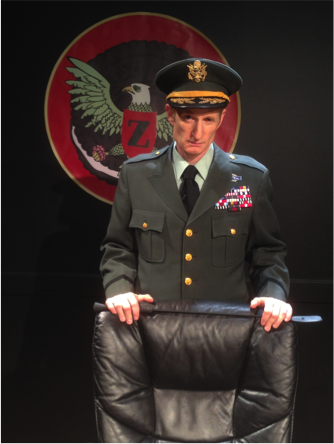 Stever led a coaching seminar with my Leadership Team. We had other coaching events before, but none had the impact, the ability to generate new insights, and — ultimately– the actionability of Stever’s seminar. He has tremendous experience and is able to tailor it to the specific needs, heis not a “one-size-fits-all” guy. My leadership team and I came [away] highly energized!