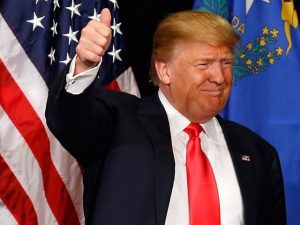 This is part 2 in a series on President Trump viewed through the lens of being a CEO. Part of President Trump’s great appeal is that he’s perceived as a successful businessperson. He’s even been talked about as being a President with CEO experience.

My article on the duties, responsibilities, and job description of a CEO, lays out four inherent parts of a CEO’s job. These are the parts of the job that, by definition, make a CEO a CEO. The CEO can delegate some things, but others simply can’t be delegated. Leading the top team is the CEO’s second main duty.

Most people talk about elections as if it’s a middle school popularity contest. “My candidate won! Neener, neener, neener.” “My candidate lost, I hate you forever!!!” Let me be tasteful and diplomatic in saying that this is idiotic beyond belief (trust me, you don’t want to hear the non-diplomatic version).

Elections are a job interview. We may not like the slate of candidates we’re given, but they’re the candidates we have, and we have to choose one to fill the job.

I’ve heard it said that Trump was elected on the “pass it down” theory of competence: he doesn’t have to have great solutions, he just has to put the right people in place who have solutions.

Has he done that?

From his Cabinet picks, I don’t believe so. When hiring for a job, you generally look for relevant past experience, or a highly transferable skill set (e.g. general management).

A Cabinet pick oversees a multibillion-dollar organization. Not necessarily a business, an organization. Governmental bottom lines aren’t measured in dollars, but in civic terms.

Several appointees don’t necessarily know the playing field of the post they’ve been appointed to. That means that if they can get up to speed in any meaningful way, they have the same learning curve as someone just entering the field. I’m not sure that hiring candidates with the equivalent experience of a new college grad is the way to go.

In short, viewed solely through the lens of hiring the right person for the right job, it appears to me that Trump is not doing a good job.

Once he’s hired the team, he has to lead them. It’s too early to tell how he’ll do in that regard. Stay tuned.

Trump has appointed a top team whose qualifications for their specific roles are seriously in doubts. Many of his picks have no background in the areas they’ve been chosen to lead, no established reputations and connections in those areas, and no evidence in their backgrounds that they’ve managed similar efforts.

If I were an investor in a company whose CEO had just made these picks for leaders of the company, I would sell my stock.

UPDATE Jan 27, 2017: The entire senior administrative staff of the State Department just resigned. Good CEOs put proper succession planning in place for themselves, and understand the need for orderly transitions to keep things from spiraling out of control. Most institutional memory resides in the employees, not in the policies and procedures manuals. I’m extremely puzzled as to why Trump would allow something like this to happen, and not work harder to keep his senior team. This is a troublesome development, to say the least.

He helped make major decisions about strategic direction. After working with him, we had a new business plan, revitalized energy, and a laser-like focus on success… You walk away with the practical stuff, but that’s just the tip of the iceberg: you also walk away with a vision of where to best focus your time, a strong sense of how to really make your idea work, and a clearer understanding of what lies ahead.